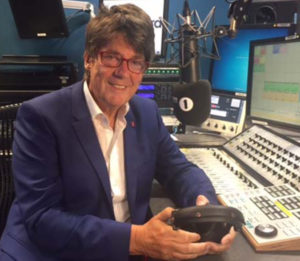 A recent series of email exchanges with this young lad (right) has reminded me of a story you may enjoy. Back in the eighties Mike Read was on Radio One (when it was listenable). He held the plum spot of Breakfast Time. I was on a roller coaster ride of a hit single with Hurry Home by Wavelength. Mike played a strong part in that hit, playing the record to death on his show. One morning I was having my breakfast whilst listening to the Mike Read Breakfast Show and he had once again played my song Hurry Home. As it finished he said “that song was written by a guy called Steve Thompson. Yesterday Pete Waterman played me a load of his demos. They were brilliant and when you come across someone so talented don’t you just hate them”. This was an incredible thing to hear on the wireless so I assure you I remember accurately every word. Anyway, I finished my breakfast and maybe half an hour later Mike was on topic again “hey remember that songwriter I told you about, Steve Thomson? Well here’s his latest record – “I Don’t Want To Be The One. As the intro started he said over it “By the way, it’s the Searchers. Did wonders for my ego I can tell you. Anyway, moving on to our current airplay scenario. Mike is once again spinning my “latest record”. This time it’s Alvin Stardust. Tell you more later.