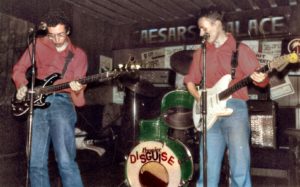 I’ve told the story many times about the time I was House Producer at Impulse Studios/ Neat Records. We had at the studio a young assistant called Conrad Lant. Conrad was on a youth opportunity scheme meaning he got £10 on top of his dole (unemployment benefit) for doing work experience with us. Conrad talked me into giving his own band a session. His band was called Venom and the rest, as they say, has become history.

But a memory occurred to me recently of Conrad’s predecessor also on work experience at the studio. I do not recall this lad’s name but we called him The Mekon (for some reason). He was a bit of a surly bugger. I remember the incident that saw his work experience terminated thus allowing Conrad to enter the picture. I was producing a band from Hartlepool called DisGuise. This would be shortly after I produced Tygers of Pan Tang because I was asked to do this by their manager Tom Noble who also managed the Tygers. He said he was pleased with my Tygers production.

On the day of the Disguise session we’d laid down the first take of their first song. The guys put down their instruments and came through to the control room to hear a playback. As they trooped in their main singer and bass player Jimmy McKenna asked: “How was it”? My stock answer to such a question would always be “Fantastic”! If it wasn’t fantastic I’d add after a brief pause “but let’s do one more to see how it goes”.

However, before I could exercise my production psychology The Mekon blurted out “sell yer bass and have a really good night out man”! This was followed by a moment of embarrassed silence and then embarrassed muffled giggles. I looked round for a hole to bury myself in but then decided if such a hole could be found I would bury The Mekon in it.

To be honest I don’t recall what my response would have been had The Mekon not interjected. But it would have been complimentary and encouraging, they were a great band with an interesting and edgy sound. The pic is of DisGuise mk 1 line-up – Peter Scott guitar, Jimmy McKenna bass, Alan Scully drums. The line-up for the 1979 Impulse session had John Miller on drums (in between his stints with White Heat)

The next day I sent The Mekon back to the dole with a recommendation that they should not send him anywhere that required the merest slice of tact and diplomacy. I may also have suggested sending him into outer space on the next NASSA mission but I don’t fully recall.

This opened up an opportunity for Conrad who actually got on great with everyone. And as I intimated, the rest is history.