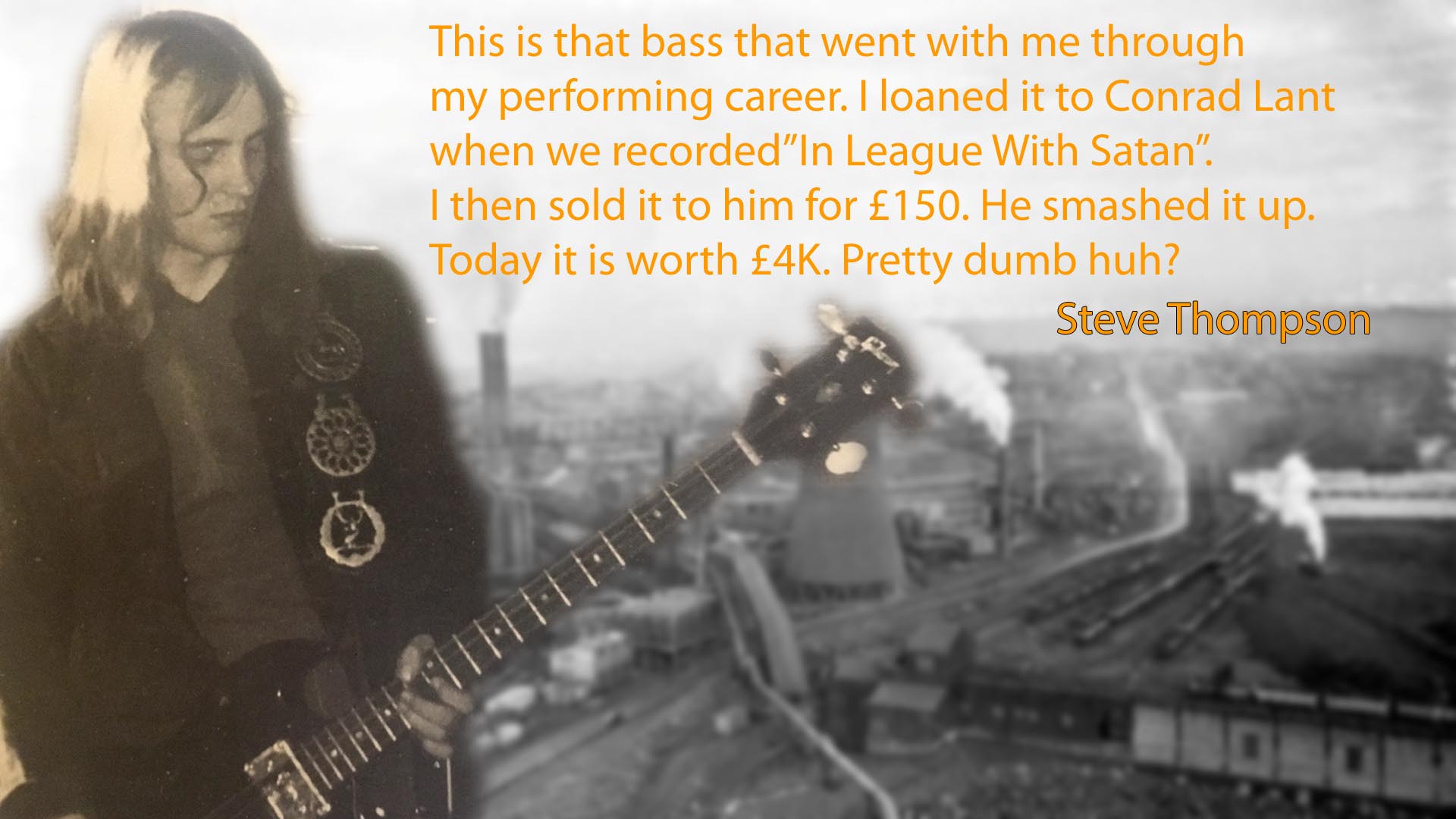 I have given many interviews about my time as a heavy metal producer. I’ve always been pretty nice about Conrad Lant.

Here’s an excerpt from one:

And finally, my last production for Neat. We had a young tape operator called Conrad Lant. Lovely lad. He was in a band and he was forever telling us about it. They would do a gig somewhere and virtually demolish a village hall. Conrad wanted to make a record. He banged on and on about it until I finally relented and gave him 3 hours downtime. The band were Venom and we cut three tracks. One of them was ‘In League With Satan’. I loaned Conrad my bass from the Bullfrog days. Conrad put it through a fuzz box and plugged it into his Marshall amp. He made a hellish racket. This has gone down in NWOBHM history as the moment ‘Black Metal’ was born.

‘In League With Satan’ came out as a single and Venom’s career went stratospheric. However, I played no further part in it. I quit Neat to pursue my own dreams. I had enough of kick starting other people’s careers. It was time to kick start mine!

You can read the full thing here

I shall have to change my approach in future and report that he was a nice chap but is now a nasty, demented and deluded loon. A website has come to my attention where as usual Conrad claims to have invented every genre of heavy metal. He also claims to have been “assistant engineer” at Impulse Studios. Was he fuck! He was the tea boy. He was 16 and on a youth employment scheme. He got his dole (unemployment benefit) plus £10 ($13) a week. I’m happy to let Conrad have his delusions but further down the page he gets pretty nasty about me by name. Normally I leave this stuff alone but in this case I’m going to address as his malicious assertions.

CONRAD: I had to really work hard in the studio to get us enough time to cut that single.

THE TRUTH: I’ve said many times in print and in audio that Conrad regaled us with tales of his band. How great they were and we humoured him. One day there was some available studio time and I said they could come in and cut some tracks. I think it was just one afternoon. Conrad had just recently taken on the roll as bassist and singer so I loaned him my own bass: a Gibson EB3.

CONRAD: We were asked by Neat to work with a guy called Steve Thompson as pop producer

THE TRUTH: Conrad was a 16 year old tape-op, a gofer, a tea boy. He had no lofty communications with Neat Records. In fact Neat Records and Impulse studios were one and the same. 4 of us worked there: Dave Wood the Boss,  Susan the receptionist, Micky Sweeney the engineer and Myself. I was the house producer, A&R for Neat Records and I ran Neat Music, the publishing arm. Yes, I produced “pop” music. I also produced Rock, folk and even a bit of music hall. I also produced heavy metal.

CONRAD – and we hated him with a vengeance.

THE TRUTH:  I recall we had a great time on that session. I got no impression that they hated me. I had just given them a big break and they seemed pretty happy about it. I’m still in touch with Tony Bray who shows no sign of hating me.

CONRAD: He didn’t get what we were about at all,

THE TRUTH: I got them entirely. They were a raw, energetic, enthusiastic band with an unusual approach and a lot of ambition.

CONRAD: he was just some old ‘know-it-all’ fat guy who hung out in the building doing sessions for crap club singers [never been’s and never will be’s] and the like,

I did not “hang around the building”, I was employed in the roles I’ve described above. I was not old and I was not fat. I was 26 and skinny as a rake. I’ll admit I’m old now and have put on a few pounds. One wonders what version of me Conrad is thinking about?

CONRAD: he knew nothing about rock or metal or anything really,

I knew a lot about rock and metal.  I was there the first time around. My band, Bullfrog supported the likes of The Sensational Alex Harvey Band, Steppenwolf, East Of Eden, The Pretty Things, The Edgar Broughton Band, Stone The Crows and many others. The first producer I was ever in the studio with was Rodger Bain (Google Him)

CONRAD: we were gonna tie him up and lock him a flight case, but we knew he had no sense of humor and wouldn’t find it funny and he’d cry like a baby.

THE TRUTH: Absolutely nobody I have been in the studio with has accused me of not having a sense of humour. In fact quite the opposite. But “tie me up and lock me in a flight case”? That’s a pretty nasty thought. Who would find that funny?

CONRAD: The original mix of the single was awful; it sounded nothing like us.

THE TRUTH: Absolute bollocks! It sounded exactly like them.

CONRAD: So I did something that nearly got me fired from the studio as well as blowing the chance of getting the single released.

THE TRUTH Nah, Conrad, my deluded friend: The flight case prank would have got you fired and removed any chance of getting the single released.

CONRAD: When nobody was book to record one day, I put the 16 track master tape back on the machine and completely re-mixed it, just went for it without permission. I then swapped the newly mixed tape that I’d done with the other tape the other guy had mixed.

THE TRUTH: Absolute rubbish. Conrad neither had the skills nor the opportunity to do such a thing. As a 16 year old work experience kid Conrad was under my supervision. I mentored him. This did not happen. I recall he and the rest of the guys were very pleased with the recording

CONRAD: So it was my mix that got pressed up into the singles, and it was only when the label was playing the first batch of discs that arrived at the office that the producer said, ‘Hang on, that’s not my mix’. I just came clean straight away and admitted, ‘No, it’s not, it’s mine! Honestly, I nearly lost my job over that…

THE TRUTH: This did not happen. Shortly after I produced the Venom tracks I quit the studio and the label. I was not there to hear the disc and utter those words. Mickey Sweeney was never there other than in an engineering capacity. The only person likely to hear the disc would be Dave Wood. That is supposing he bothered listening. He could not give a fuck. It was heavy metal and heavy metal was selling.

CONRAD: the label people were livid. But I stand by what I did. The single sounded raw, hard and very much the way it should have been. I’ve still got the original tape at home – it’s nothing like us, I should probably just destroy it so it never gets out.”

More fantasy. It’s such a shame that Conrad makes up all these stories but it’s unforgivable that he tells lies about me to do me down and big himself up. I gave him a lot of help and gave him his first break. Luckily most people I helped back in those days are not so dismissive about it.