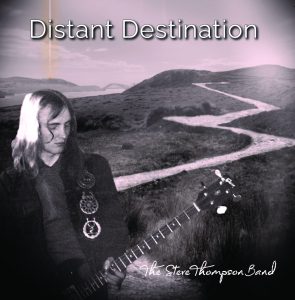 I set up a Facebook Group early in 2019 to share the development of “The Long Fade” album with interested parties. The album was released later that year to some great reviews. It also got plenty of airplay. It was re-released in 2021 by Cherry Red Records as part of an extensive deal on recordings I’ve made going as far back as the early seventies. I began my musical career in 1969. Since The Long Fade is the first release to bear my name, you could say it was an album 50 years in the making!

So, how to follow it up? That difficult second album. Well, I don’t have 50 years to mull it over. There were a few false starts, then Covid 19 and lockdown hit and all bets were off. One day in lockdown, a new song emerged from my consciousness: “Distant Destination”. Due to the time we are living through, and, perhaps, my own time of life, this is quite an introspective song. It is now complete with a magnificent Jen Normandale vocal. It also led to a concept for another Mark Mychreest album cover. Other songs have followed, some introspective, some quirky: it could be a strange album. The Facebook Group is now repurposed to keep you up to speed with developments on Distant Destination. News and rough mixes, that sort of thing. You can find it here: https://www.facebook.com/groups/distantdestination