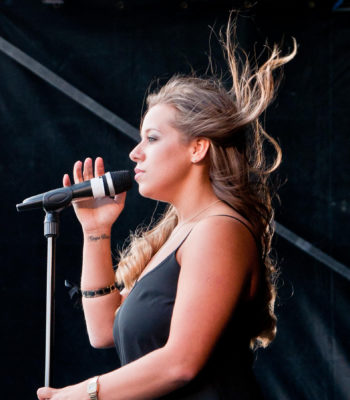 Kerrianne Covell who hails from Norton on Teesside has been on the journey of her dreams since the age of 12.

Having won a competition in 2013 with the region’s favourite and biggest radio station TFM, Kerrianne performed at the Metro Radio Arena as the champion of their Big Audition. Supporting the likes of Pixie Lott, Example, Little Mix and many more gave her the fuel to fire her burning desire to be one of their peers.

Bounding inside with talent in Pop, Contemporary R&B and Alternative, Kerrianne and her performing experience took to the X Factor stage in 2014. Wowing not only the crowds but also the judges, who gave her a much-coveted spot at the judge’s houses with Cheryl Fernandez-Versini.

Her mother Pamela recently reached out to veteran North East Songwriter, Steve Thompson asking if he could write a song to help Kerrianne’s singing career.  Steve has written songs that have been recorded by Celine Dion, Sheena Easton, Elkie Brooks, The Hollies, The Searchers, The Tygers of Pan Tang, Baby Ford, Colin Blunstone, Elaine Page and Chris Farlowe. Now Steve has written a handful of songs for this talented young singer and Kerrianne is set to perform one of them ‘Over Bar The Doubting’ with Steve’s band at The Live Theatre. Newcastle on December 14th. Kerrianne will also sing a song that Steve wrote for Elkie Brooks as well as another he wrote for Alvin Stardust. On the latter she is teamed with the other singers of the band Terry Slesser, Mick Whitaker and Lorraine Crosby.

This fine array of North East vocal talent will sing songs from Steve’s repertoire as recorded by International recording artists and Steve also tells the stories behind the songs using a range of multimedia. This is a fascinating and unique project, reflecting the creativity and variety of the North-East music scene, with some of the region’s best singers and musicians.

Steve said “when a mum asks you to do something then it must be done. I was really impressed with Kerrianne’s X Factor performance ( https://steve-thompson.org.uk/kerrianne/ ) I was even more impressed when we went through the song I’d written for her. She has a terrific grasp of melody and interpretation of lyric. Now the audience at Live Theatre can look forward to a new story, a new song and a new singer”