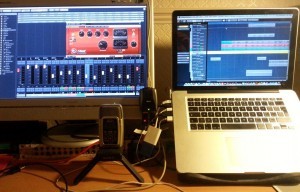 Computer recording vs the old days: spent about 4 hours yesterday trying to recover a lost track. Weird stuff with lots of blind alleys trying to rectify.  I’d done all the right things with incremental saves and backup files but it seems many of the saves were corrupted. So how would this play out in the old days? – If a tape became corrupted? I guess we’d have given up sooner and re-recorded rather than trying to recover or rebuild. I guess the lost time might be similar. There’s always the fear of losing some of the magic of the original take but then: magically, the rebuild nearly always turns out to be better!