↓
I finally did something sensible (I think) with technology. I bought an expensive state of the art (at the time) HTC Desire. As a Mac user I didn’t want to put all my “apples” in one basket so went Android instead of iPhone. I really do like Android. However, all that desirability of apps is a waste as the internal memory of the HTC Desire is pitiful. I’ve moved as many to the external card as possible but some (Google’s own Gmail, Maps being the chief suspects) will not go to the card.
A friend of mine has a Samsung Galaxy S, which has plenty of internal memory, and I was quite impressed with it. However when I contemplated purchasing one I was struck by its physical size. How could I part with my perfectly formed HTC Desire. But then again, a machine with more power could be more useful as an everyday tool. Looking at what is available I could not find a Desire sized phone with a Galaxy size memory.
So here’s what I did: I purchased second hand off Amazon, last years model Samsung Galaxy. What the hell I have last years model HTC and it’s second hand too. At this price I could afford to walk around with two phones for a while I decided which was best with the loser hitting Ebay.
I have to say the machine likely to hit Ebay is the HTC.  The increase in Physical size is negligible and easy to get used to. I like the design of the HTC and the functionality of the implementation of software is nice. I now realize that different manufactures use Android differently. So I miss some of the HTC Sense approach but then again I think I’ll get used to the Samsung approach reasonably quickly. What I am already loving is it’s power and speed. I have all my audio, multimedia, business and entertainment apps on there including some I had purchased and had to ditch on the HTC. 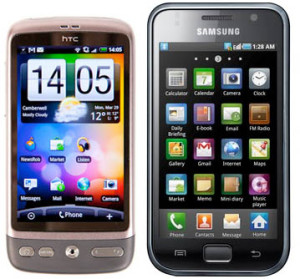