This story is taken from a piece I wrote ages ago called “Remembering the Eighties”. The 80’s story was originally commissioned by a website called “Metal Godz”. The site is long gone and my eighties article remains unfinished and unpublished. 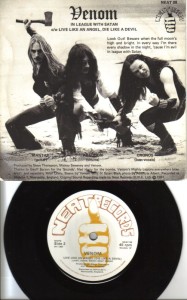 During all the recording sessions for Neat Records, we had the assistance of Conrad Lant. Conrad was a good tape op and got on well with everyone. He was always going on about his own band. It seemed that they saved up for about 3 months until they could afford enough pyrotechnics to blow up half a city and then they had a major blow out and had to save up to do another show. Conrad said very little about the music, it was mostly about the explosions. One day he informed me that the bass player had quit and he was being called upon to play bass. A gig was imminent so I loaned him my Gibson EB3 I still had from my own early career. (apparently, this fact is now ingrained in folklore as the moment “Black Metal” was born)

Conrad could barely contain himself seeing all these bands make recordings. He wanted his band committed to tape too. We had a slack day coming up so I relented and said he could bring his band in during downtime. Again I loaned him the bass. I produced three tracks with them but the only title I remember was “In League With Satan”. I taught the guys a musical trick sometimes called “The Devil”. The video below explains this.

I had no idea these tracks would come out as a single, I just produced it as a favour. Now Conrad was convinced he was on the way to mega-stardom and in need of a bass so I let him talk me into selling him my Gibson EB3. I explained the history of the instrument and made him promise it was going to a good home. The next time I saw my old bass it had holes drilled in it and an upside-down crucifix nailed crudely to it. My bass was now a mess and Conrad had become Chronos!  Years later he told me the EB3 had “died” in Los Angeles (he gave it a burial at sea)