For no apparent reason this thought came to me as I was out driving: “I’ve played guitar with the Jeff Beck group and sung with the Nolan Sisters”. How diverse is that? So. how did these two, poles apart situations come about? Well, firstly producer Wayne Bickerton picked up on one of my songs and wanted to put it out on his label, State Records. He really liked the demo and asked who was playing on it. I informed him it was just two people. My mate Paul Smith on drums and me doing everything else. So Wayne says, “OK, you come and play guitar on the track and I’ll pull in a bunch of session people”. Vocals on the release were to be Mick Whitaker but it also ended up with Chris Farlow singing it (I met him at the studio a few months later) You can hear both these versions by clicking here. So the sessions took place with Waynes session guys and I showed them all the parts – it sounded a lot like the demo only more polished of course. When I returned to the North East Keith Satchfield (of Fist) asked me about the sessions. I said there was some guy called Simon Philips on drums and a bass player with an unusual name. Keith said “was his name  Mo Foster”. Ahah. I said that’s it. Keith looked a little stunned for a moment and then declared “F*** me, you’ve only been playing with the Jeff Beck band (Mo and Simon far right in pic below)

So on to the other part of the story. In 1985 I took part in an event to support the Bradford Football Fire Disaster Appeal. The gig took place at St Georges Hall, Bradford and featured the likes of Smokey, Kiki Dee, Motorhead, Colin Blunstone and of course the Nolan Sisters. I played keyboards with John Verity’s band. John had organised the gig. Top of the Bill was Gerry Marsdon (he of the Pacemakers). There was a big jam session towards the end and I distinctly  remember trading keyboard licks with Rod Argent. Jim Rodford and Bob Henrit, respectively bass player and drummer with the Kinks were keen to do a couple of Kinks tunes in the jam so we obliged with “You Really Got Me” – no problem. Next came “All The Day and All of The Night”. The main riff was easy enough to busk but nobody was quite sure of the chords to the bit “The only time I feel all right is by your side” so it kind of fell apart there with just bass and drums really knowing it. The funniest bit for me was when we were doing a blues jam. I looked to the assembled guitarists  on stage and noticed they were playing in the key of G (by the chord shapes their hands were making) and so I joined in, also in the key of G (naturally). A few moments later I glanced at Worzel of Motorhead and spotted he was playing in the key of A, blissfully unaware he was the only person doing so!  Incidentally this was the gig credited with re-uniting Smokie but that was almost short lived when their drummer Pete Spencer fell backwards off the drum podium and injured himself. Luckily, as well as multiple guitarists we were sporting two drummers (Paul Smith) at the time and so the beat went on. And finally; my singing debut with the Nolans. The last act was Gerry Marsden and the last number was the anthem for the appeal “You’ll Never Walk Alone”. Everybody got up and sang this one. There were loads of us so we clustered in groups around several mics. I clustered with the Nolans and that, dear readers is who I got to sing with the Nolans. Sadly there is no picture of this event but I do have the programme (below) strangely the Nolans are not mentioned on it – a strange oversight. ≈ 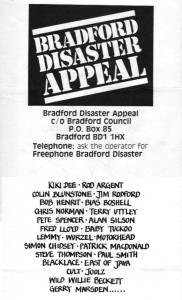